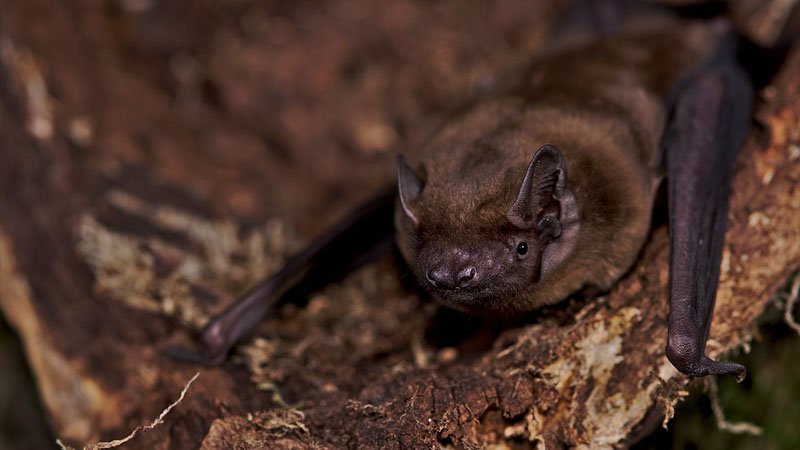 The Noctule bat is the largest species of bat in the UK. They’re usually the first to appear in the evenings, often leaving their roosts before the sun sets.

Noctules have plush, chocolate brown fur which can change to reddish-brown as winter approaches. Their face and wings are quite dark.

Even though it’s the UK’s largest bat, you can hold the Noctule in the palm of your hand.

Where Do Noctule Bats Live?

Noctule bats are widespread across much of England, Wales and southwest Scotland. There a none in Ireland.

They’re tree dwellers and live in holes caused by rot or old woodpecker holes. You’ll also find them in bat boxes. They don’t often roost in buildings and if they do, it’s for a short time.

Trees and woodland are important feeding habitats. In urban areas, you might also see them around street lamps feeding on the insects that are attracted to the light.

What Do Noctules Eat?

Hunting starts earlier than other bats, often before sunset. They fly above the treetops making repeated, steep dives to catch their prey which they eat mid-flight. They sometimes take food from the floor.

When Noctule bats hunt, they can reach speeds of 31mph or 50kph.

How Do They Breed?

Single males establish mating roosts, usually in the hole of a tree. They defend their roosts from other sexually mature males for several weeks.

A male Noctule usually attracts 4 or 5 females (sometimes up to 20!) who stay with him for 1-2 days.

Maternity colonies often change their roosts with mothers carrying their young from one location to the next.

Mothers leave their young in chreches when they go off to feed. Pups feed on their mother’s milk for 3-4 weeks. At 6 weeks old they’re fully weaned and able to forage and hunt for themselves.

Female Noctules are sexually mature by their first autumn but most don’t mate until their second year. Males become sexually active by the end of their first year.

When and Where to They Hibernate?

Noctule bats hibernate in trees, rock fissures and sometimes buildings over the winter months. Usually between November and April. On mainland Europe, hibernation colonies can be as large as 1,000 bats. In the UK, they’re much smaller.

That said, Noctules have been recorded feeding over the winter when conditions are right.

By the time May arrives, they’re fully active again.

A bat detector can pick up their echolocation calls between 20kHz – 45kHz. Some adults and most children can hear their calls.

Threats to the Noctule Bat

Populations of Noctule bats have declined a lot in the last few decades. This is due to;

As a result, the Noctule bat is a priority species in the UK’s Biodiversity Action Plan. It’s also protected in the UK under the Wildlife and Countryside Act 1981.

When and Where to See Noctule Bats

Noctules bats are most active between April and September.

You’ll have the best chance of seeing them in wooded areas just before dark. They fly high above the canopy so keep looking towards the sky. You might see them diving as they hun for their prey.

No comments to show.